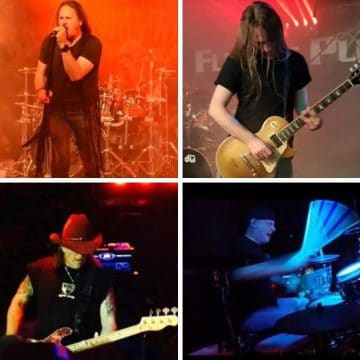 “From the upcoming Kings of Dust record. A little Christmas season cheer from us to you…Give it a listen and let me know what ya think? Recorded a while ago with original former members Mike Patruno on guitar, Donny Fargo on drums and current members Michael Beck on vocals and yours truly on da bass. I didn’t think we could do it any better than this version. I hope you like!”

In an interview with Sleaze Roxx back in December 2016, Chaisson spoke about Kings Of Dust as he advised: “I have a band called Kings Of Dust. We were actually recording our debut CD when I got cancer so it got put on hold. It’s very ’70s style blues rock, not unlike Badlands. It features Michael Beck on vocals, an excellent guitar player named Ryan McKay, and our new, cool drummer Jimi Taft. The funny part is Jimi has actually never played with us. But that’s the good thing about having your own band, I just went ahead and gave him the gig [laughs]! I have played with him a number of times before. We had a great Bonham style drummer named Donny Fargo but unfortunately he had a number of injuries that prevented him from being able to play with us, so it took us awhile to find another drummer. I’ve been writing some new material and we should be ready to record sometime after the first of the year. A very ’70s blues rock style! We have a Facebook page, check it out!”