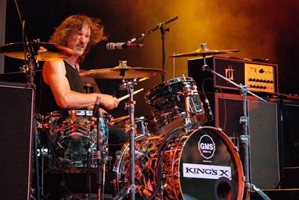 Said Pinnick through Facebook, “I need prayer warriors now. My friend Jerry Gaskil (drummer of King’s X) suffered a heart attack last night, he was operated on and is in stable condition at the time. Asking for prayers for his complete healing and ask you all to be in agreement in Christ. Thank you friends.”

Hours later Pinnick updated the situation by saying, “Julie said Jerry woke up pulling chords out, she says hes fiesty! That’s a good sign! Thanks everyone for prayers and good vibes, it can only get better now.”

Jerry Gaskill was born in South Jersey on December 27, 1957. He moved to Springfield, Missouri in 1978 and met a guitarist named Dave Gouty who intorduced the drummer to Greg Volz. The trio formed a band with Mike Schmidt, and it was through this connection that Gaskill eventually met Doug Pinnick and then Ty Tabor.

Eventually Doug, Ty and Jerry, after playing in different bands and recording projects, decided to work together and formed what would later become known as King’s X. The band reached the heights of their fame in the late ’80s and early ’90s with albums such as ‘Gretchen Ges To Nebraska’, ‘Faith Hope Love’, ‘King’s X’ and ‘Dogman’ and the hit singles “It’s Love”, “Black Flag” and “Dogman”.