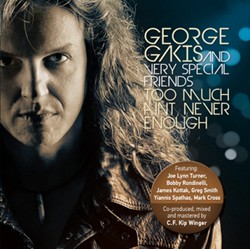 George Gakis has been a longstanding figure in the Greek rock music scene and has just released ‘Too Much Ain’t Never Enough’. The album has been released through Perris Records and can be purchased at www.perrisrecords.com, with audio samples available at www.georgegakis.gr.

George Gakis created The Troublemakers in May 1993 as a five person (melodic) rock group, influenced by groups such as Whitesnake, Aerosmith, Bon Jovi, Deep Purple, Winger and the Scorpions. Through his own label G. G. Records, he released three albums — ‘Keep On Rock ‘n’ Rollin’ (1989), ‘Pain In My Ass’ (1995), and ‘Forbidden Paradise’ (2000).

At present he resides in Ioannina (Greece), where he is businesswise active. On the side, he still appears throughout the country and in cooperation with the municipality of Ioannina he has been in charge of the Castle Rock Festival for the last four years, hosting major artists such as: Scorpions, Whitesnake, Deep Purple, Glenn Hughes, Winger, Dokken and British pop band James, among others.