KISS and Alice Cooper headline Domination Festival in Mexico from May 3 to 4, 2019 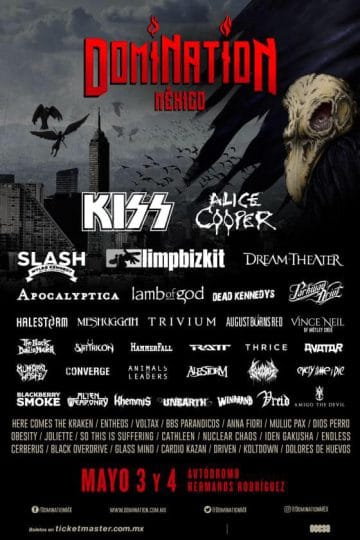 The Domination Festival at the Autódromo Hermanos Rodriguez in Mexico from May 3 to 4, 2019 will be having two Sleaze Roxx favorites — KISS and Alice Cooper — as headliners. Other Sleaze Roxx friendly artists include Slash featuring Myles Kennedy and The Conspirators, Halestorm, Vince Neil, Ratt and Blackberry Smoke.

“Ol Black Eyes is BACK for Domination MX in Mexico this May. Tickets go on sale Wednesday, Jan 23 at www.domination.com.mx“

Other bands that will be performing at the Domination Festival include Limp Bizkit, Dream Theater, Apocalyptica, Lamb of God and the Dead Kennedys.

Of note and perhaps as a sign of the times, Pennsylvania rockers Halestorm have a higher billing on the festival than Ratt and even Finnish instrumentalists Apocalyptica are higher up in the pecking order than Mötley Crüe frontman Vince Neil.