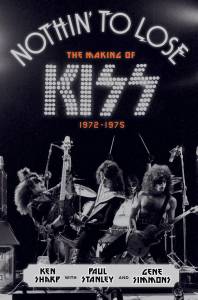 On September 10th author Ken Sharp will release a 560 page book entitled ‘Nothin’ To Lose: The Making Of KISS (1972-1975)’ through It Books, a division of HarperCollins.

‘Nothin’ To Lose: The Making Of KISS (1972-1975)’ chronicles the crucial formative years of the legendary rock band KISS, culminating with the groundbreaking success of their classic 1975 album ‘Alive!’ and the smash single “Rock And Roll All Nite”, a song that nearly four decades later remains one of the band’s most enduring anthems.

Profusely illustrated with over 150 photos, the end result is an indelible and irresistible portrait of a band on the rise and the music scene they changed forever.