KISS‘ long-time catalog consultant Robert V. Conte was recently interviewed by Andrew Daly for Vinyl Writer Music. Conte was promoting his upcoming memoir My KISS Story, which will be released sometime in the future. 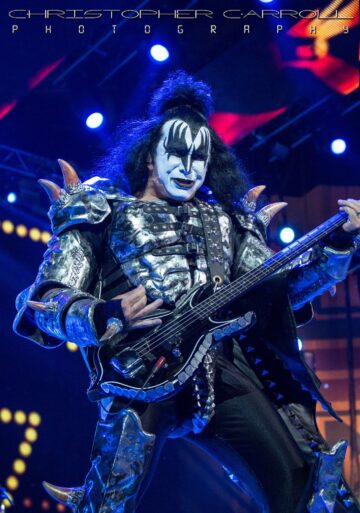 In terms of how he began working with KISS, Conte indicated: “I wrote the first black-and-white biography comic about KISS for a company named Revolutionary Comics, published back in 1990. I first met Gene Simmons at a Revenge pre-tour show in 1992 where he knew my work and commented that I did not have permission to publish the comic. (Later, Gene worked with the same company when it published the KISS: Tales of the Tour and Pre-History comics). I met the entire band at a record store signing the following year and gave Gene a heavily researched document detailing all of the errors PolyGram Records had made on their releases of the Casablanca backlist up to that point. Soon I had an opportunity to assist Tommy Thayer (then Gene’s personal assistant, now current KISS guitarist) on a few of the early 1995 KISS Conventions and, not too long after, was invited to become the official KISS Catalog Consultant. There I assisted in remastering and repackaging most of the albums available at that point with two new compilations. It was a dream come true!”

With respect to his thoughts on KISS‘ various line-ups, Conte opined: “Every incarnation of KISS is unique in its own way and there are things I appreciate about them all. As long as Gene and Paul Stanley remain with the group, I would rather KISS continue in some form than stop altogether. However, don’t be surprised if someday the brand is sold to some big conglomerate when those two decide to retire. KISS should outlive those who kept the flame lit, so to speak, just like Mickey Mouse and Batman. Those iconic characters didn’t stop after the retirement and/or deaths of their creators. For better or for worse, they evolved as necessary in order to remain relevant and interesting.”

You can read the rest of the interview with Robert V. Conte at Vinyl Writer Music‘s website.