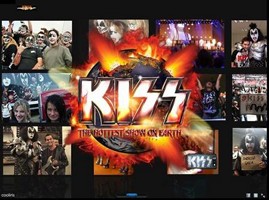 KISS (www.KISSonline.com), the iconic American rock band that has sold more than 80 million albums, played for millions and become an integral part of the American culture, has just notched another first in their long list of stellar achievements: Liveshare by Cooliris featuring KISS (www.cooliris.com/liveshare-kiss), an exciting mobile photo-sharing application that will launch on KISS’ The Hottest Show on Earth tour this summer.

Fans attending The Hottest Show on Earth tour, KISS’ biggest, loudest, most over-the-top concert tour ever that kicked-off July 23 in Cheyenne, Wyoming, will become the first to have photos of KISS, themselves, and their friends experiencing the raw power and excitement of a live KISS concert, appear live on giant KISS video screens.

Through a free downloadable app, KISS fans can snap photos during the concert with the highlights being displayed on the KISS jumbo screen. Users will also be able to share photos to Facebook and Twitter, bringing their friends into the live concert experience.

The new KISS Liveshare experience is the first time that the excitement and energy of a concert can be shared in real time with friends and fans that can’t be at the live event. Photos taken at the Hottest Show on Earth will appear on Facebook and KISSonline while the event is unfolding, allowing fans to immerse themselves in the concert photos through the popular Cooliris 3D wall.

KISS is excited to be able to bring this awesome concert experience to fans wherever they may be.

The free Liveshare app featuring KISS will be available for download at the iTunes Store and Android Market.

KISS is the first band ever to launch such a highly-interactive and socially-engaging fan photo experience. KISS and Live Nation Merchandise partnered with Los Angeles-based new media firm Riot House (www.theriothouse.com) and Cooliris (www.cooliris.com), innovator of the fastest and most stunning way to engage with media on desktops or devices, to bring KISS Liveshare to fans on The Hottest Show on Earth tour.