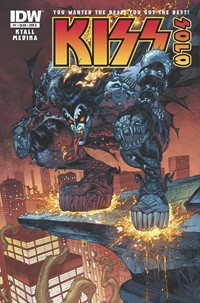 Echoing their famous series of 1978 solo albums, this March legendary rockers KISS take to solo adventures in a new miniseries from IDW Publishing. Further exploring the deep mythology that’s made the Kings of Rock hold dual citizenship as Kings of Comics, this year, The-Four-Who-Are-One must take up arms alone against a slew of dynamic enemies and evil forces.

Spread out across four dimension-shattering issues, this face-melting slew of hard-rocking comics tectonics kicks off with ‘KISS Solo: The Demon’, a tale starring Gene Simmons’ classic alter ego, The Demon! Veteran KISS writer Chris Ryall and fan-favorite KISS artist Angel Medina, rejoining the band for the first time since ‘KISS: Psycho Circus’, weave another tale of epic bombast and explosive rock and paving the way for the accompanying tales of the Starchild, the Celestial, and the Catman.

“We’ve turned KISS into gangsters, barbarians and teenage girls so far in our KISS comics,” said Chris Ryall, IDW’s Chief Creative Officer, “but now it’s time to give everyone the unfettered KISS over these four issues. Issue one sees the Demon taking on none other than the Four Horsemen of the Apocalypse, and no one draws widescreen apocalyptic action better than Angel Medina. It’s a thrill to have Angel back in the KISS fold.”

In addition to providing full art on issue one, Medina is on board for covers for all four parts of the solo series. To further give longtime fans a bit more, each issue’s storyline and title is culled from the original solo album songs, such as issue one’s “Radioactive.”

Continuing a comics partnership as fruitful as it is sonically booming, the solo series is a must-have for comics fans and members of the KISS Army. After all, rocking ‘n’ rolling all night and reading comics every day sounds like a pretty solid plan, doesn’t it?