KISS had to eliminate certain theatrics for Las Vegas residency back in Nov. 2014

KISS‘ long-time bassist and co-founder Gene Simmons was recently interviewed by The Guardian and explained that certain theatrics that the band wanted to do during their Las Vegas residency in November 2014. 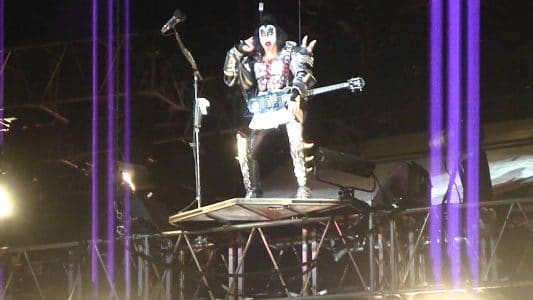 Simmons stated in his interview with The Guardian that: “We were going to try some new technology for our show and we planned to rehearse in Vegas and set up the stage, then we figured, if we have the place for 10 days, why don’t we do 10 concerts in front of a live audience? We tried descending on a flying saucer thing from the back of the hall. There was no net; if you fall, you die. We only did that once or twice. I still fly up to the top of the rafters and spit fire – there’s enough life-threatening stuff during the show without adding something else.”

Simmons also commented on what is in his will as he stated: “I’m very corny, I’m giving a lot of it away to causes and ideas that I believe are important. Most of it will not go to the inheritors. We all do what we think we should do. Mostly, I think, not to be too corny, we should all try to leave this place a bit better than when we came into it.”

You can read the rest of the interview at The Guardian.

Sleaze Roxx stated the following in its concert review of KISS‘ opening night of its Las Vegas residency at The Joint: Hard Rock Hotel & Casino in Las Vegas, Nevada, USA on November 5, 2014: “Given that The Joint’s venue is smaller than what KISS is accustomed to, the band’s giant “spider” of lights was missing. In addition there were some modifications to some of the usual acrobatics that Simmons and Stanley would regale the audience with. Rather than being hoisted above the rafters after his blood spitting bass solo, Simmons was simply lifted about half the height onto a platform near the venue’s ceiling. The platform then moved forward for the entire audience to get a good glimpse of The Demon singing his trademark song “God Of Thunder”. For over ten years, Stanley has flown over the audience to play the classic “Love Gun”, but this time he “flew” onto a side platform to the right of the stage — which happened to be where our seats were located — before “flying” across the audience to a podium to the left of the stage where he played the intro to “Black Diamond”.”