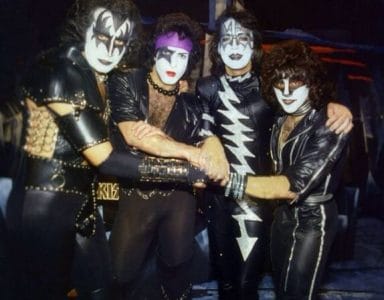 KISS My Boots podcast hosts Andrew Sgambati and Jason Herndon have premiered a bombshell of a video for KISS fans as they showed the long shelved music video for KISS‘ “I” song (go to 3:30 mark of video below) from their commercial flop Music From The Elder album, which was released back on November 10, 1981.

Before airing the video, Sgambati noted: “Just a little bit about this ‘I’ video. Obviously, there are two versions of the ‘I’ video. This one was directed by Bruce… filmed over Halloween weekend in New York city and this is the famed Fortress of Solitude ‘I’ video, the one where there are pictures in the early years in the… The Early Years book from Gene and Paul has some pictures of this…. We have the entire video to show you….”

Wikipedia states the following in part about the Music From The Elder album (with slight edits): 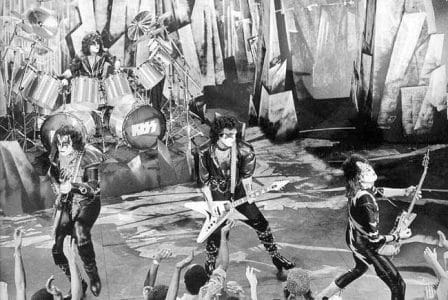 “Music from “The Elder” is the ninth studio album released by American rock band Kiss.

A substantial departure from their previous output with its epic concept and orchestral elements, album sales were so poor that Kiss did not embark on a supporting tour for the first time in its eight-year history, opting instead to make a handful of promotional appearances. Music from “The Elder” was Ace Frehley‘s last partnership with the band until their 1996 reunion Alive/Worldwide Tour.

While “A World Without Heroes” was later performed on the band’s 1995 MTV Unplugged appearance, Kiss have largely avoided live performances of songs from the album. “A World Without Heroes”, “The Oath”, and “I” were all performed live on the ABC program Fridays in 1982; other performances from the era were lip-synched while the original recorded version played. During a 2004 Australia show, the band attempted to perform “The Oath” and “I”, but Gene Simmons had long forgotten the lyrics. Short performances of “I “, “Mr. Blackwell”, and “Just a Boy”, were played on the 2011 Kiss Kruise. “The Oath” was performed in its entirety during both electric shows on the 2013 and on the 2014 Kiss Kruise.”

KISS‘ “A World Without Heroes” video:

Kiss – A World Without Heroes