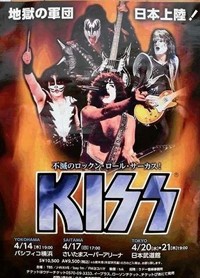 Veteran rockers Kiss have postponed an upcoming tour of Japan.

The band was due to jet to the Far East next month for a number of shows, but the concerts have now been scrapped and the trip has been pushed back.

The musicians have not given a reason for the postponement, but a message posted on the band’s website reveals the dates will be re-booked soon with added shows.

The post reads, “Kiss has postponed their (sic) Japanese tour to include more concert dates this fall. Tickets will not go on sale on March 12th as previously announced. Once the new tour dates are confirmed, concert information will be posted on Kissonline.com.”