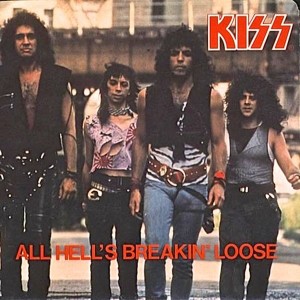 Legendary rockers KISS released the song “All Hell’s Breakin’ Loose” 32 years ago on February 6, 1984 as the second single from Lick It Up, their first album where the band members did not wear their traditional face make-up.

The song “All Hell’s Breakin Loose” was a break in the mold for KISS given that frontman Paul Stanley talked his way and arguably “rapped” through part of the song’s verses.

Sleaze Roxx stated the following in its review of Lick It Up back in September 2003: “Rejuvenating their careers, Lick It Up would help Kiss regain their footing in the metal genre as they went on to sell millions more albums. Although Lick It Up gave Kiss the creative boost they needed, it would turn out to be [Vinnie] Vincent‘s final album with the band…. Lick It Up is a return to form, and gets two thumbs up!”