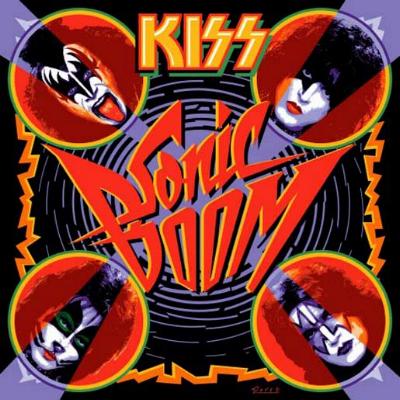 KISS and Walmart announced today that SONIC BOOM–the bands highly anticipated CD, and its first new material in 11 years–will be sold in the U.S. and Canada exclusively at Walmart and Sams Club retail locations beginning October 6. SONIC BOOM, produced by the bands Paul Stanley in Los Angeles, is the centerpiece of a three-disc set that also features a completely re-recorded greatest hits CD as well as a live DVD shot in Argentina during the bands recent, record-breaking KISS ALIVE 35 South American tour. The CD set will retail for $12, with pre-orders starting in September on Walmart.com.

KISS’ Gene Simmons says, “SONIC BOOM” may be the best new record we’ve done since Destroyer! It is Rock And Roll Over meets Love Gun. The worlds biggest retailer had better get ready for the hottest band in the world and hire more cashiers before October 6th!

Stanley continues, “Through all of the albums that are considered our classics, we tried to always find ways to give our fans extras that went beyond just the music. Besides our making the best KISS album in decades, Walmart has made it possible for us to include a bonus CD with 15 of our most famous songs and an additional live DVD, shot during our recent concert in Buenos Aires. So in every sense, SONIC BOOM is the ultimate return to classic KISS form. You wanted the best, you got the best!”

In celebration of the albums release, KISS announced today a special KISS ALIVE 35 show at Detroit Rock City’s legendary concert venue, Cobo Arena, on September 25. This historic structure, which is slated for closure, has hosted KISS concerts on numerous occasions, not the least of which was the series of shows that were recorded to become the KISS ALIVE! album. Tracks made famous on KISS ALIVE!–including “Rock and Roll All Nite”, “Deuce”, “Black Diamond”, and “Hotter Than Hell”–are well represented on the greatest hits disc included with SONIC BOOM. The Detroit show, which will live another 35 years in KISStory, features opening act Buckcherry and goes on sale to the public at 5 pm EDT on August 21 at Ticketmaster.com.

Walmart, one of Americas largest music retailers, is finalizing its exciting plans now for its in-store and online destinations for KISS fans surrounding the launch of the new album and tour, and will host various KISS products in addition to their music in its stores this fall. More details on Walmart KISS activity, announcements regarding album pre-sales, sweepstakes and KISS appearances will be shared shortly.