With heavy hearts we wanna make public that our drummer, founding member & friend Andi Schnitzer has decided to quit the band. Andi declares:

Hereby, I’m declaring that I am no longer a part of Kissin’ Dynamite. I left the band a few weeks ago.

Before I’m gonna explain my decision, first of all I wanna express my appreciation for the fact, that our parting was characterized by a respectful atmosphere.

In terms of the reason for my departure, I must simply say, that I came to the conclusion, that unfortunately, we drifted apart too much over time and didn’t speak the same language anymore, also regarding essential issues. Therefore, I drew the conclusion, being at peace with myself and the boys.

Nevertheless, I gratefully and remorselessly look back on a wild ride, which quite exactly began 20 years ago with Jim on some old wooden benches on our schoolyard, and which led me across hundreds of stages in several countries of the world, in order to play in front of thousands of people. I had the privilege to experience many elevating moments, meet great people and see exciting places. And all this for free!

Thank you at this point in particular to Jomi and the whole KD – Crew. Your idealism, your commitment and your loyalty throughout all the years was beyond any doubt!

And of course, my thanks also go out to all fans. We had some headbanging, earpiercing, sweat- dropping, small- and deep-talking, phototaking, autograph-writing, beer-drinking,…just great hours together and it warms my heart when I remember that!

As far as I’m concerned: I’m sure that sooner or later I’ll be hitting the drums in a band again. I guess, I can’t help it anyway. 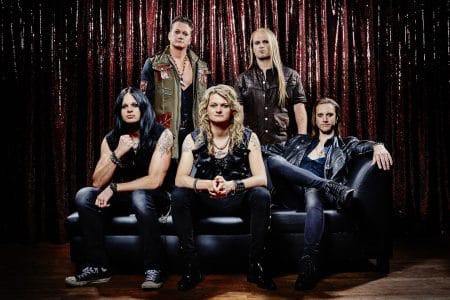 Until then, among other things, I’m gonna use the time in order to publish a book which I passionately wrote in the last one and a half years. It’s definitely gonna be a Rock ‘n’ Roll book, but not only…

I finally wanna say the following:

It’s beyond question, that Rock ‘n’ Roll in general since many years, and in particular since Corona is going through hard, hard times. Who looks around, inevitably must face the following truths:

One Rock Icon after the other bids good bye to this world, due to quite natural reasons. Meanwhile, music is falling in value more and more with the result that those, who make it, cannot make a living from it anymore.

Additionally, Corona forces partly legendary clubs to their knees and takes away the last thing from bands, that was still left to them: Playing live. Not to mention the crews, bookers, security people and so forth. Even Gene Simmons indicates that Rock is officially dead and claims, maybe not entirely unfounded, that due to the screwed situation, there haven’t been any truly iconic bands since the Foo Fighters.

And yes – Indeed, one actually cannot say anything against all that at first sight. And maybe even not at second or third.

But I am of the opinion that Rock ‘n’ Roll ain’t about looking around. For me, it simply means to look inside, in order to remember in a quite unnostalgic way, that Rock ‘n’ Roll was originally (and) timeless. And therefore is. And will be. Naturally.

And maybe, this unpleasant situation that the world (of music) is currently in, only wants to downright force us back into just this priceless memory, even if it hurts at first. Maybe, it’s just there to remind us, that the essence of Rock ‘n’ Roll never ever was about any outside conditions. Neither time-wise, nor spatial, nor musical.

That Beethoven didn’t have more or less balls than Keith Richards, Grohl Dave or Lady Gaga. And that a twelve-year-old, that watches a youtube video of a concert during the lockdown while feeling sheer joy and pleasure at it, just ain’t less Rock ‘n’ Roll at this moment than someone who’s standing on a stage in front of thousands of people.

And maybe, like this, bit by bit we might be getting a bit clearer again about the fact, that Rock ‘n’ Roll never ever was about anything else than about an unconditional attitude of freedom and therefore simply cannot die. Less than ever when the world currently seems to come to an end.

Jim, Steffen, Ande and Hannes: I wish you all the best from the bottom of my heart!

For those about to Rock, I salute you!

We wanna wish Andi all the Best on his further journey. We’ll keep our common time in fond memory.”

Kissin’ Time‘s “I’ve Got The Fire” video (from Ecstasy album):