German rockers Kissin’ Dynamite are set to embark on their Europe In Ecstasy Tour, which will kick off tomorrow at Hyde Park in Osnabrück, Germany. Special guests on the tour consist of John Diva & The Rockets of Love, Black Rain and Supernova Plasmajets. 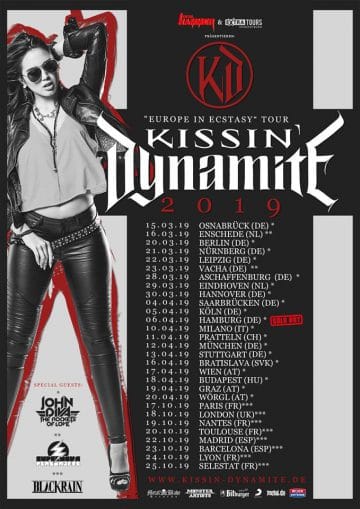 The following message was posted on Kissin’ Dynamite‘s Facebook page back on February 13, 2019:

Only a few Days left until we finally kick off our Headlining-Tour!

We’re currently working on a mind-blowing, surprising Show you will never forget! If you haven’t already, make sure to grab your Tix, cause you don’t wanna miss this \m/

Sleaze Roxx stated the following with respect to the #2 position: “Just like the The Lazys, Kissin’ Dynamite also have a story of perseverance and patience (but seemingly to a lesser extent) to ultimately come up with an absolutely killer album. The German “stadium” rockers’ sixth studio album Ecstasy is when everything seems to have come together for the band including killer melodies and the right blend between melodic rock with an edge and modern metal. I was literally shocked when I listened to the album the first time. I was wondering how come I hadn’t really noticed these guys before? Although their previous material (check out their live CD/DVD Generation Goodbye – Dynamite Nights released in 2017) is much stronger than The Lazys‘ prior discography (aside from a few select tracks), it wasn’t until Ecstasy that Kissin’ Dynamite seemingly put everything together. There are so many great tracks on Ecstasy and the further along you get in the album, the great tracks just keep popping up. Ecstasy may well be the record where Kissin’ Dynamite take the mantle from H.E.A.T and Eclipse when it comes to delivering quality melodic rock with a real edge.”

New Album ECSTASY out now! https://kissindynamite.lnk.to/ecstasyTo connect with Kissin’ Dynamite, use the following hashtags!#‎kissindynamite #ecstasy #youre…