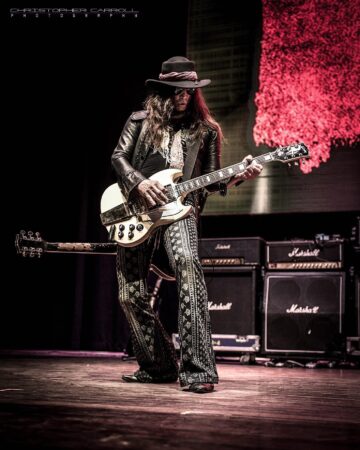 It’s been no secret that KIX guitarist Ronnie “10/10” Younkins has struggled with drug addiction issues and has had to take some time out of the band line-up over the last decade.

KIX have just announced that Younkins is temporarily unable to perform with the band for the foreseeable future. No details on the reasons why were provided but it seems that they could well be drug related based on past occurrences.

“KIX regrets to announce that our friend and brother guitarist Ronnie “10/10” Younkins is temporarily unable to perform with KIX for the foreseeable future. We wish Ronnie all the best, and we hope for his speedy return to the band.

Meanwhile, we welcome guitarist Bob Paré for KIX’s upcoming performances. Bob is an accomplished musician, having studied at The Music Institute in Los Angeles, CA, and having taught music theory and guitar at several institutions including Western Maryland College and Maryland Institute of Music. Bob was a session musician for several independent label releases, and has spent most of his long career performing in the Maryland, Washington DC area with various bands including Forcer, Ever Rise, Project: Euphoria, and most recently, RUSH tribute band SUN DOGS with KIX bassist Mark Schenker. Please join KIX in welcoming Bob to the family, while we await Ronnie’s eventual return.”