In terms of providing a sneak peek into the band’s future projects, Forsythe advised: “We released Rock Your Face Off in 2014 (first release in almost 20 years) and this past October we released Can’t Stop The Show, a DVD documentary and live CD, which 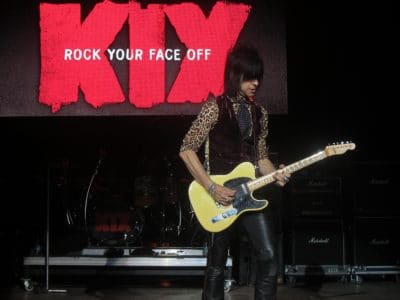 went to number 1 on the Billboard DVD chart. We’re planning on recording another new record at some point in the next year or so, if we can get a break from touring long enough to do so.”

With respect to some of his best touring experiences, Forsythe stated: “Going to Japan for the first time back in 1989 was a highlight! There was a big crowd holding signs and banners waiting for us at the airport when we arrived. We couldn’t leave our hotel without being mobbed. Our first full length arena tour was with Ratt in 1989 and when we come around to the DC / Baltimore area and played the Capital Center (where I’d seen many concerts growing up) The place was sold out and the entire crowd was singing along to every one of our songs. That was a great feeling!  There were some not so great moments too, like running out of gas in our van in the middle of nowhere or one night, having the Fire Marshall close down the venue because it was over filled and the place broke out into a riot. We had to grab our guitars and make a run for it before they released the police dogs.”

You can read the rest of the interview with Forsythe at Any Louder.

Sleaze Roxx stated the following with respect to that latter finish: “For the first time ever in the history of Sleaze Roxx, a band has achieved the top spot in both the Sleaze Roxx’s Top Ten Albums of 2014 and the Sleaze Roxx Readers’ Top 20 Albums of 2014! And it is not just any record that gets this distinction but Kix‘s first album in nineteen years, which is a return to the band’s vintage sound from the 80s. What makes Kix‘s number one sweep in both categories so incredible is that for the first time ever in Sleaze Roxx’s history, the two best of lists for the year were conducted completely independent of each other given that departing Sleaze Roxx editor Skid compiled the Readers’ Top 20 Albums and released it to me after Sleaze Roxx’s Top Ten Albums for 2014 was decided. You would think that achieving both critical and popular acclaim would translate into mega sales for Rock Your Face Off but Kix‘s frontman Steve Whiteman recently revealed to Sleaze Roxx in an interview that the changed landscape in the record industry has translated into far fewer record sales than the band was used to back in its heyday.”