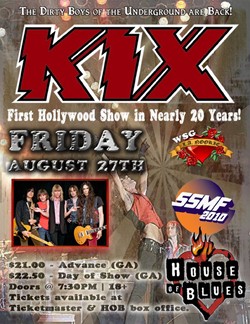 Kix Return To The Sunset Strip On August 27th

Founded in 1978 in Hagerstown, Md., as The Shooze, the band changed its name to The Generators before settling on KIX. KIX signed with Atlantic Records in 1981, and released seven albums between 1981 and 1995, including the hugely popular “Midnight Dynamite” showcasing such favorites as “Cold Shower”, “Sex” and the title track “Midnight Dynamite”. KIX hit platinum success in 1988 with “Blow My Fuse,” featuring such hits as “Cold Blood” and the smash power ballad “Don’t Close Your Eyes”. With the downfall of 80’s rock in the early 90’s KIX broke up in 1995.

KIX resurfaced in 2004, and began playing a few local sold out shows, but only in the Baltimore area.Then, in the summer of 2008, KIX performed outside its home area for the first time in 13 years at two of the biggest rock festivals in the US: Rocklahoma in Pryor, Okla., and Rock the Bayou in Houston, Texas. KIX garnered “Best Performance” at both festivals, a dubious distinction considering KIX shared the stage with Sammy Hagar, Alice Cooper, Tesla, Queensryche, Ratt, Lita Ford, Warrant and more.

From 2009 to now, audiences are thrilled to see KIX performing more successful festival and sold out shows outside Baltimore.

KIX’s return to Hollywood after 20 years is predicted to be “Hollywood’s 80’s rock event of 2010” and sure to be a total sell out. KIX’s freakish popularity and cult status far outweighs that of other acts from the 80’s rock genre that sold more records and had more hits. KIX has certainly stood the test of time.