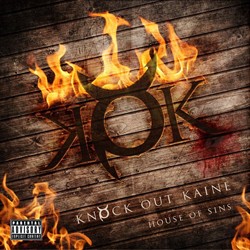 Knock Out Kaine Release ‘House Of Sins’ In North America

Knock Out Kaine will be releasing ‘House Of Sins’ to the North American market today — August 5th 2012.

This long awaited release is gutsy, guitar driven sleaze rock, delivered in a musically brilliant way. Even though it hasn’t officially been released in the States, it has climbed into the Amazon top 100 Hard Rock category two times and is poised to take American radio by storm. The power ballad “Coming Home” was debuted on the number 1 radio show in Seattle (Bob Rivers) and has been selected as the soundtrack for an upcoming episode of Into The Drink TV (a National Geographic show airing in 131 countries).

‘House Of Sins’ was mastered by Ray Staff (Led Zeppelin, Black Sabbath, Muse, Cradle Of Filth) who said, “I’ve been mastering records for a long time across many different genres. This was a particular pleasure for me because of the quality of the songs and the excitement of the production.” Ray also goes on to say, “There isn’t a weak track on here”.

It is at their incendiary live shows that Knock Out Kaine have forged their reputation as a potent act with plenty to say and the big mouths needed to shout it out! Having been voted Kerrang’s ‘Best Unsigned Act’ in 2008, the band headed out onto the road to learn how to perfect the delivery of a kickass rock show. Mission accomplished. The band supported Steven Adler’s new band — Adler’s Appetite — across the continent on a suitably debauched string of shows. They also secured a slot on the PepsiMax stage at Download 2011 and have also toured with Chris Holmes of WASP’s new outfit as well as playing scores of their own headline shows. Knock Out Kaine have done their time, and 2012 sees them come out swinging. Finland’s Valkyrianmusic raved that the band, “Sounds like a bastard child of Guns N’Roses and Motley Crue”.

The ‘House Of Sins’ title references a ‘party house’ much loved by the band that belonged to a friend who has now passed away. Dean Foxx (vocals), Jim Bohemian (guitar), Lee Byrne (bass) and Danny Krash (drums) have seen the rough side of life. In fact it’s where they spend most of their time.