Knock Out Kaine Releasing ‘House Of Sins’ On May 18th 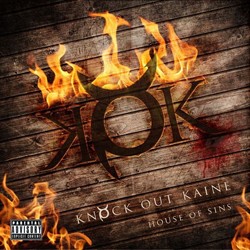 UK rockers Knock Out Kaine are gearing up to release their debut album, ‘House Of Sins’, on May 18th. Samples of the upcoming album, which has been a year in the making, can be heard at the band’s website — www.knockoutkaine.com.

Knock Out Kaine are a welcome curveball to what has been tipped for 2012, unfashionably cool with their middle digit firmly raised to the trend setters and followers alike. Over the last few years the band have forged a chemistry way beyond their years, which only truly great bands are able to accomplish. By no means X-Factor style ‘overnight successes’, they have been working their craft hard since their conception in 2005, building to the point where Knock Out Kaine are ready to explode onto 2012 in a very big way.

After winning Kerrang!’s Best Unsigned Live Act in 2008 and spending the bulk of 2009/2010/2011 touring both in the UK and Europe, Knock Out Kaine are taking on all comers. They have toured Europe and the UK offering support to Steven Adler, Guns N’ Roses’ original drummer, when he took his already successful act Adler’s Appetite on the road.

Knock Out Kaine played 22 dates with Adler’s Appetite across Europe’s most famously debauched venues. Knock Out Kaine also recently toured with Chris Holmes of W.A.S.P. supporting his new band Where Angels Suffer on the UK leg of thier recent european tour, as well as rocking a presigious spot at the 2011 Download festival.