Korean glam metal band, Victim Mentality, will be returning in 2016 to play the South by Southwest (SXSW) Music Festival in Texas, USA. Victim Mentality will play at the festival on March 16, 2016 as part of the K-Pop Night Out concert and will do a second showcase on March 19, 2016.

Victim Mentality will be releasing a new single entitled “I Hate Hiphop” on March 10, 2016, which will feature their new guitarist Die-Amond.

Speaking exclusively with Sleaze Roxx, Victim Mentality‘s frontman Krocodile advised why the Korean based band is so interested in playing in the USA: “The United States is the birthplace of glam metal so it’s always been a dream of ours to play there. We visited the States for the first time last year to play at SXSW ’15 in Texas. That was actually our first time ever 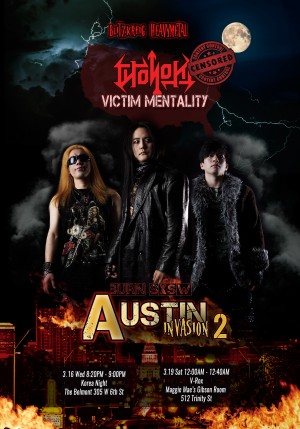 performing outside of Korea as well which made it extra special. SXSW was an amazing experience. It was the best festival we have ever been too. It was awesome getting to play for new audiences and being able to watch other bands and meet people from all over the world. We’re only playing at SXSW again when we return to the US in March. But it would be fantastic to one day be able to do a proper American tour and share our brand of heavy metal with more people!”

In regard to what is the metal scene like in Korea and how it differs from what Victim Mentality saw in the USA last year, Krocodile stated: “We didn’t really get to experience the metal scene in the US while we were at SXSW. We played three times at the festival last year. And one of our showcases was as part of an all-metal bill, but there were only international bands on the bill. But at the metal showcase, a woman flashed us [laughs] — which was really awesome. That never would happen in Korea! One thing that was really cool was that the audiences we played for last year were really supportive and receptive to our music. They didn’t know our band at all, but they still got really into the shows. Granted, we were pretty fucking great!”

With respect to Victim Mentality‘s vacant drummer position, Krocodile stated: “We’ve got a drummer playing with us right now named Sphinx. He’s just filling in while we look for a permanent replacement for Tarantula which is why we haven’t officially announced him as a member. He’ll be with us in Texas at SXSW eating lots of barbecue and playing some excellent heavy metal!”

“Victim Mentality formed in Seoul, South Korea in 2009 and play a fun and powerful mix of 80s-inspired heavy metal and glam metal. 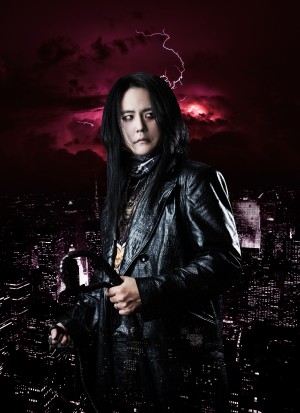 Originally started as a duo, the members took their time crafting material for their first EP, Magic Finger, writing the songs in 2009 and 2010 and recording them in 2012 and 2013. In February 2013, bassist Scorpion joined the band and in July 2013 Victim Mentality finally made their live debut. Not yet having a drummer, they relied on a drum machine for their initial gigs until finally finding a drummer in February 2014.

Wanting their wardrobe to fit with their sound, Victim Mentality adopted a look that pays homage to metals heyday. And to keep audiences further entertained, flamboyant frontman Krocodile often brandishes a bullwhip while delivering his impassioned wails. Quickly winning over fans and capturing the attention of the Korean music industry, in May 2014 – less than a year after their first live show –the group played at Seouls Green Plugged festival and later that summer appeared at the Incheon Pentaport Rock Festival. 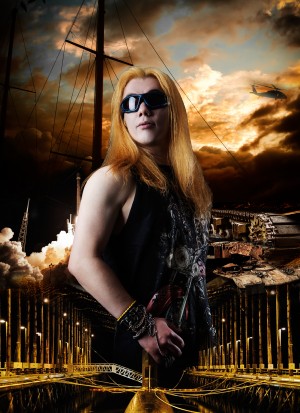 In March 2015, Victim Mentality played their first overseas gigs at South by Southwest (SXSW) in the United States. The groups three performances at the renowned event were well received and earned accolades from the likes of The Austin Chronicle. In April 2015, Victim Mentality issued their Heavy Metal Is Back full-length debut. Wanting to showcase the albums catchy, playful cuts to both the metal loving masses and regular music fans, in July 2015, Victim Mentality appeared at Korea’s top musical outing – the Ansan M Valley Rock Festival – and in August they traveled to Russia to perform at the V-Rox festival. November 2015 saw the act parting ways with guitarist Kyungho Sohn and drummer Tarantula. But a new chapter in the band’s history began in January 2016 with the arrival of guitarist Die-Amond.

March 2016 will see the group releasing a new single and returning stateside once again for another SXSW appearance. Regardless of whether they are gigging at home or abroad, Victim Mentality has only one mission – to show everyone that “Heavy Metal Is Back!””