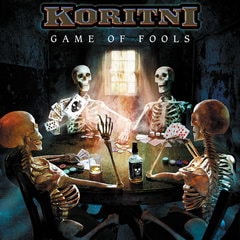 KORITNI PLAY ‘GAME OF FOOLS’ ON MAY 4TH:

Rising from the ashes of the acclaimed Green Dollar Colour, Koritni was formed in 2006 by Australian singer/songwriter Lex Koritni, since then Koritni has been ascending through the ranks of the international rock scene with an ever-increasing influence. Starting off with a tour in France and Belgium in spring 2006, where they opened for Scorpions, the band established itself in early 2007 with the release of their album Lady Luck. Mixed by Mike Fraser (AC/DC, Aerosmith, Metallica), Lady Luck won over a European rock press who sung its praises: Rock Hard and Rock N’Folk in France, Classic Rock in the U.K, Rock Tribune in Belgium, Aardschock in Holland and This Is Rock in Spain to name just a few. This enabled the band to go back on tour in Europe, covering 37 shows and performing at prestigious events such as Le Mans 24h Motorcycle Race and Bol d’Or in Magny-Cours. This tour was celebrated with the release of the double CD/DVD live Red Live Joint in April 2008, scoring again 8/10 in the English magazine Classic Rock.

The 4th of May 2009 will see Koritni back in business in the UK with Game Of Fools. This new album comprising of 13 tracks was produced by Anton Hagop (Silverchair, Powderfinger), once again mixed by giant Mike Fraser in association with Dan Leffler and mastered by Ryan Smith at the legendary Sterling Sound studios in New-York. In addition to a remarkable sound, the band forethought the aesthetics by having the album’s cover artwork designed by Mark Wilkinson (Iron Maiden, Marillion, Judas Priest).

Game of fools is a harmonious synthesis of the direct Lady Luck and the more venturesome styling of Green Dollar Colour. This new opus states a matured sound revealing the true energy carried by the band, an alchemy that is strengthened by their touring experience, fortified by their musical convictions, and reinforced by an unchanged line up from day one.