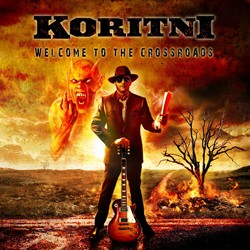 Koritni Return With ‘Welcome To The Crossroads’

The new album features artwork by Mark Wilkinson, who worked on some of the band’s previous releases (‘Game Of Fools’, ‘Red Live Joint’, ‘No More Bets’). The band also reunited with long-time engineers Mike ‘Fraze’ Fraser, Dan Leffler and Dean Maher to record and mix the album throughout 2011 at various locations like Megaphon Studios in Sydney, Hipposonic and the Warehouse Studios in Vancouver. Once again, after his work on ‘Game Of Fools’, Ryan Smith performed the mastering at Sterling Sound, New York.

For the first time in Koritni history, a few special guests were asked to take part of the project, and they kindly agreed. So it is with honor the band can announce that Jeff Scott Soto (WET, Journey), Jeff Waters (Annihilator) and Rusty Brown (Electric Mary) will be featured on the album.

The first single “Down At The Crossroads” is now available as a free digital MP3 and can be downloaded at www.koritni.com.