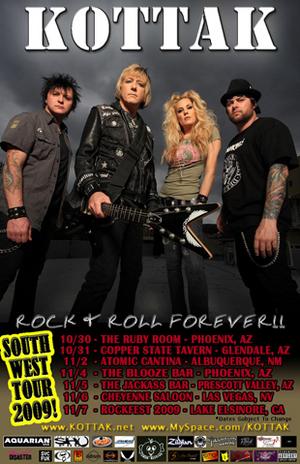 Kottak have announced a series of concert dates throughout the US south west from October to December. Kottak, formerly known as Krunk, is lead by Scorpions drummer James Kottak under the alias of Jimmy Ratchitt and his wife Athena, who happens to be Tommy Lee’s sister.

Prior to joining Scorpions, James was the drummer for Kingdom Come, The Cult, Wild Horses, Montrose, MSG, Warrant, Buster Brown, and countless others. In addition, James has performed on over 120 albums.

Check out KottaK at www.myspace.com/kottak