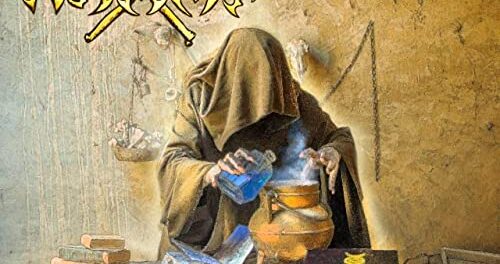 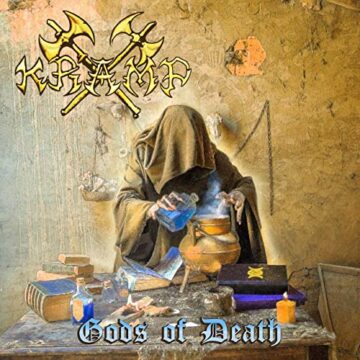 Kramp‘s “Bio” on their website indicates in part (with slight edits):

“After some years trying to find the right people to set a line up, Mina and Lap find musicians between 2010 and 2012, being able at last to play live and record a homemade demo, published only digital.

Sometime after and with the project of recording an EP in the making, the line-up comes back to its roots, just Mina and Lap.

In 2013 and keeping the idea of that record, they established contact with Juan Jaramillo (ex-Wild), who would handle drums and Sergio García (Mamá Ladilla, ex-Wild) taking bass in studio, leaving Lap in charge of all the guitars. That EP never saw the light, with the exception of “Walkyrie” included in the compilation “I Recopilatorio de Iberia Metálica”.

The same year, Mina moves to Madrid to find musicians and stablish a proper line-up. In 2015, a new line-up is set, including J. J. Negrete and Sara C., both at guitars, and that same year, the band starts to record a new EP. At the beggining of 2016, Albertt von Krow enters as a drummer and while waiting for the release of the EP, one track of it, “Tale of Revenge” is included in the compilation “Spanish Steel Attack Vol. 1”, with a different mix. In October of that same year, “Wield Revenge” is released by Metal Crusaders and Lullaby Records and the band starts to play live again, being well received by the media (Thundersteel Magazine, Streetclip, etc) in both aspects.

Starting a new year, J.J. leaves the band in 2017, being replaced by Darío Torralba, and allowing the band to continue with its projects, being selected in some contests such as “Ampudia Apoya la Música” and “Barcia Metal Fest” while playing during that whole time in an extensive tour through the country, with Slough Feg, Attick Demons among others.

At the end of 2018, Darío leaves the band and in 2019, David takes the axe to be the new lead guitar of Kramp. The plans for the band to record their first long length continue on the same year.”