Pretty Boy Floyd‘s last studio album Public Enemies dates back to December 2017 when it was released via Frontiers Music Srl. Majors was asked what’s going in with the band to which the guitarist replied (as transcribed by the 80’s Glam Metalcast 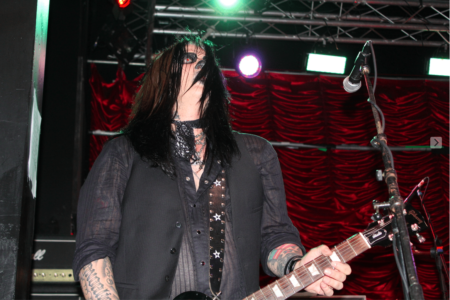 “There’s some shows coming up. Unfortunately, Covid is putting a damper on some of the shows and festivals. Especially the ones overseas. We had to cancel Australia and push some other things back. I finished the new Pretty Boy [Floyd] album. The music has been done for awhile. Steve [Summers] was supposed to come and do the vocals and then Covid came along. We thought it would pass quickly and we would wait it out, which didn’t happen. Hopefully we can finish it this year and put it out next year on Frontiers. It’s a little heavier than the last album, Public Enemies. It’s still got the same Pretty Boy Floyd sound and hooks. This new one is a little more raw and in your face! I’m looking forward to getting it out there because it will probably be the last Pretty Boy Floyd album we ever do. It’s getting kinda hard for me write Pretty Boy Floyd lyrics. It was easier when I was in my 20’s versus being 50. When we wrote those songs, I never thought I’d be 50 fucking years old singing “When I was walking out of class the other day at school”. Or “Your Mamma Won’t Know” or “Only The Young”. It’s kinda ridiculous to do those fucking songs now. Everybody in the audience is old!!! But hey, if KISS can still do it, so can we.”

You can listen to the interview with Kristy Majors on the 80’s Glam Metalcast podcast below: