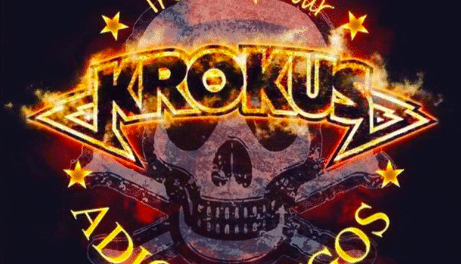 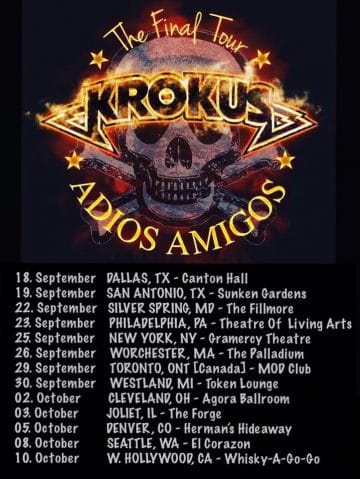 Krokus have rarely toured in North America since the 1980s and the last time that they played in Toronto, Ontario, Canada reportedly dates back to their show at the CNE Grandstand back on August 31, 1986.

Sleaze Roxx stated the following in its concert review of Krokus’ set at the M3 Rock Festival back on May 2, 2015: “One band that I was intrigued to see play at the M3 Rock Festival was Switzerland hard rock pioneers Krokus who had apparently not played on American soil for ten years until April of this year! I have never been a big Krokus fan but do know them from back in their MTV video days from their songs “Ballroom Blitz” and “Midnite Maniac” and I am familiar with their classics such as “Eat The Rich”. Krokus hit the stage predictably with “Long Stick Goes Boom”. Frontman Marc Storace initially and strangely looked like he was doing some slow moving physical exercises in the way that he was posing and moving. I was quite surprised to see Krokus play their cover of The Guess Who‘s “American Woman” next. It just seemed so cliché. In addition, for a band with over fifteen studio records under its belt and being limited to nine songs on this day, you would think that Krokus would limit the cover songs and play more of their own original songs.

Krokus‘ set rolled on. I was not familiar with the group’s show closer “Quinn The Eskimo (The Mighty Quinn)” so was surprised when my friend The Meister advised that this was another cover song and a rather obscure one at that. Since Krokus played two cover songs, I think that they should have included The Sweet‘s “Ballroom Blitz” which likely got them a lot of exposure in the States back in the mid 1980s. I get that Krokus are likely not fond of their commercially sounding The Blitz record but it is a shame that the group did not play any songs from that album which is one of its two biggest selling records on American soil. Just like Europe later on, I found that Krokus did not get the memo that it would be better to try to play your best known hits that got you over in the States when you have a time limited set and you are playing a country that you have largely bypassed for most of your career.”