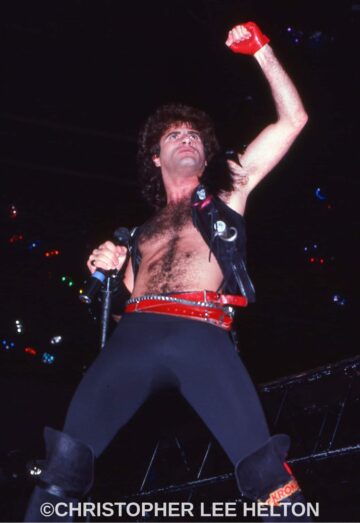 In terms of how his upcoming solo album came about, Storace indicated (as transcribed by The Metal Voice with slight edits):

“I feel in a hole of lockdown Covid boredom, so I said I am going to get creative, I opened my drawer and I had a pile of lyrics and Ideas and I thought I had enough material for something. I needed a guitar player. ‘Live and Let Live’ was written with this guitar player that was a neighbour of mine and I used to go over to his place which was a little studio and we spent hours writing songs. We came out with about 20 of them. I’m not trying to be like Krokus at all. “

With respect to the musical direction of his solo album, Storace opined: “It’s energetic, heavy melodic hard rock. There are also a couple of ballads, then there is something out of the ordinary, a blues song and the last song (should be), is quite acoustical and lighthearted. Now I am nervous and excited for the release date for the 8th of December and we are also doing our first gig at The Mascotte in Zürich, Switzerland. Plus on May 21 2022 we are opening up for the Scorpions in Zurich.”

Storace also has a documentary in the works and he noted: “I got this documentary I am working on which is so far behind unfortunately due to Covid. The idea was to follow my old footsteps, Malta then London [Easy Money band] and the bands I was in and then come to Switzerland , then TEA, the Krokus thing, tell some stories and have some guests and so on. This is where we are at right now. We had a release date but it changed because of Covid and got pushed out. In the meantime, the director got involved with my solo project and he already did the first trailer with the intro of the song ‘Live And let Live’ on it and a couple of days ago we shot the first video for the solo album, which is a video of the song ‘Live And let Live’.”

You can read other excerpts from the interview with Marc Storace at The Metal Voice‘s website and/or listen to the interview below: