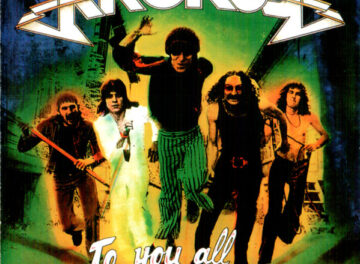 Swiss veteran rockers Krokus‘ second studio album To You All, which was originally released way back on April 29, 1977 is now available on lime green coloured vinyl. To You All features the Krokus line-up of band founders Chris von Rohr (lead vocals) and Tommy Kiefer (lead guitar) along with Fernando von Arb (rhythm guitar), Jürg Naegeli (bass) and Freddy Steady (drums). 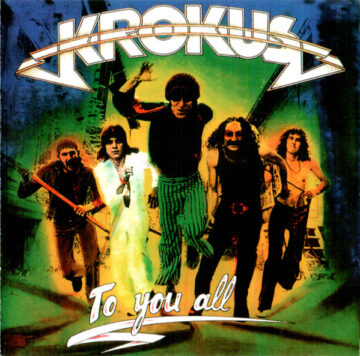 “YOU WANTED IT – YOU GOT IT! [Only available in our official Krokus Shop – https://krokus-store.com/en/new-products – WORLDWIDE SHIPPING]

“To You All“, the classic from the 70’s was the breakthrough album for KROKUS in Switzerland. It was created during the phase when Chris von Rohr was still the band’s vocalist and the sound shifted from bluesy to rock music. The album features as well some fine blues guitar playing by Tommy Kiefer on “Trying So Hard” and “Protection”.

The creative songwriting duo Fernando von Arb/ Chris von Rohr came together here for the first time and brought to light some gems from the early days. The first step towards high energy rock was “Highway Song”. The video clip for this groovy track was filmed on a closed highway in winter and became the band’s cult hit with the very first KROKUS music video ever [click on link below].

Also, songs like “Lonesome Rider” and “Mr. Greedy” clearly showed in which direction the band wanted to rock in the future.

The emotional highlight of the album is the ballad “Festival”. In 5 minutes, the song unmasks the power and transience of summer. A perfect sunset in rock music, including a magnificent 3-minute twin lead guitar solo à la “Hotel California”. Undoubtedly, some of the most atmospheric melodies that KROKUS has ever delivered. “A magnificent symphony that sounds as if the last summer day of the year is swallowed up by the red-orange sunset,” music journalist Sir Fries wrote at that time.”