Krokus to extend their farewell tour to 2020 and play shows in the USA, Canada and Mexico

Great news for Krokus fans and particularly their North American fans as the band will be extending its farewell tour into 2020 and pans on playing shows in the USA, Canada and Mexico. Back in September 2018, Krokus announced that they were going to 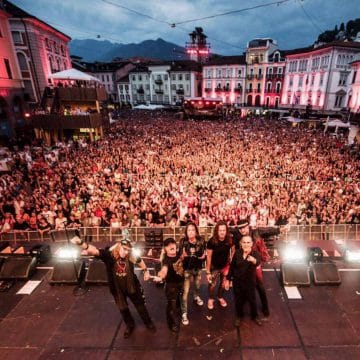 be embarking on a farewell tour titled Adios Amigos World Tour before calling it a day with a final show at the Hallenstadion in Zurich, Switzerland on December 7, 2019.

The following message was posted on Krokus frontman Marc Storace’s Facebook page back on June 2, 2019:

“We always said Zürich is the last show for Europe – but USA, Canada and Mexico want some ‘Adios’ too!

That’s why we do an encore in 2020 there – we think our fans deserve that – they cannot ally to Europe – cheers and enjoy the summer, Krokers“

“As the old saying goes “I’d like to put the horse before the cart” ? by saying that we, The Band, are not responsible for choosing the Countries/Cities/Towns we play in, since we depend on your local promoters to book us.

But you can help by calling your Local Radio/TV Stations asking for more KROKUS..Hell Yeah! we’d love to wake up your lazy town!!! ????

Our Booking-Agent for the American Continent is:
*First Row Talent*
e-mail: firstrowtalent@aol.com” 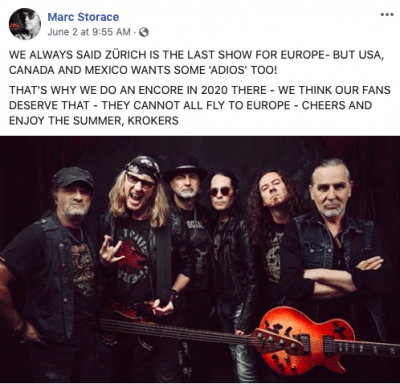