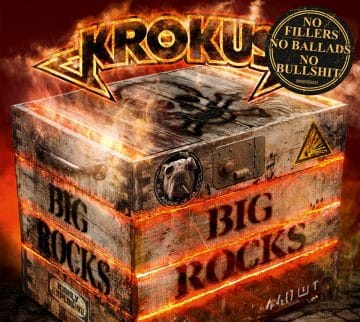 The following messages were posted on Krokus‘ Facebook page:

Get ready for BIG ROCKS [our 18th studio album]

As the sticker on the CD wrapping reads: NO FILLERS – NO BALLADS – NO BULLSHIT

A little technical info in his own words from Dennis Ward, who engineered and mixed our new album:

“The new KROKUS album was recorded in the RnR cellar of bassist, founder and producer Chris Von Rohr with a handful of microphones, a long multicore snake and my trusty old Soundscape 32 track recorder.

Mixed by myself at The TrakShak in Karlsdorf, Germany. All basic tracks were recorded live in a 4×4 square meter cellar room (no kidding) and I couldn’t believe that it actually worked! This is the way to make real Rock n’ Roll.”