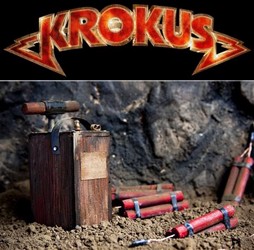 Switzerland’s most successful rock export, Krokus, have begun working on their 17th studio album with the wroking title of ‘Dirty Dynamite’.

For the next couple of weeks Krokus producer and bassist Chris Von Rohr, along with vocalist Marc Storace, will be laying down bass and vocal tracks at London’s Abbey Road Studios. Coincidentally The Beatles, the band who made Abbey Road studio famous, are celebrating their 50th anniversary this year. Sound engineer for the recording sessions is again Dennis Ward (Unisonic), who also recorded the band’s last album ‘Hoodoo’.

Chris Von Rohr promises, “The new songs sound like ‘dirty dynamite’: pure, dirty, in your face hard rock with a touch of blues.”

Adds Marc Storace, “We’ve been taking the time it needs writing for our next rock album and we guarantee that it definitely will contain no fillers!.”

‘Hoodoo’ was released on February 26, 2010 and featured the return of the ‘classic’ Krokus line-up of Marc Storace, Chris Von Rohr, guitarists Fernando Von Arb and Mark Kohler, and drummer Freddy Steady. Sony Music later released a limited and numbered ‘Special Edition’ of the album to celebrate its platinum status — complete with footage of the band’s celebrated live reunion show at Stade de Suisse in Berne, Switzerland and an original Krokus belt buckle.

To keep up to date on the recording of ‘Dirty Dynamite’ visit www.krokusonline.com.