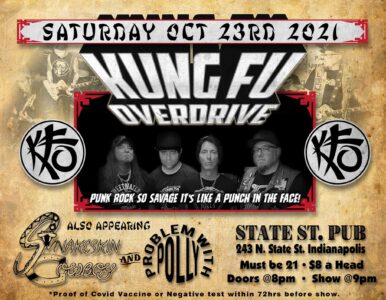 Speaking exclusively to Sleaze Roxx, Boyles advised as follows about the band’s origins: “Kung Fu Overdrive has been in the making for about three years now. Myself and other vocalist/guitarist Wayne Griffith tried to start this band while I was still in American Bombshell. Wayne is in another band from Indiana called Machine Guns and Motorcycles, which is one of my favorite bands from here. We wanted to work together but just couldn’t find the right members at that time so we just put it on the back burner. I was busy with American Bombshell so I couldn’t put in a whole lot of time anyways.”

In terms of how the band name Kung Fu Overdrive came about, Boyles indicated: “We came up with the name three years ago when we first tried to put something together. Wayne was throwing out ideas and I took two of his ideas and put them together and we both dug it! We’ve gotten numerous compliments on the name. I personally love it.”

With respect to their upcoming debut album, Boyles advised: “We’ve already recorded it and it’s being mixed at the moment. We just got a new drummer about a month ago so we are working with him now. He’s nailing the songs and doing great on the new stuff that hasn’t been recorded yet. So we actually have three members from Shitlist in this band now. Ritchie is playing bass and Gary is on drums.”