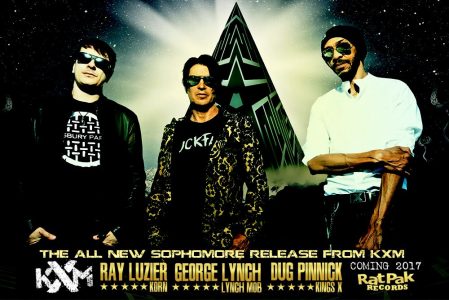 “Scatterbrain” is the all new sophomore release from the super-group KXM comprised of drummer Ray Luzier (KoRn), guitarist George Lynch (Lynch Mob) and King’s X front man dUg Pinnick and is the follow up album to their highly successful 2014 self-titled debut release which landed at #31 on the Billboard Top 200. 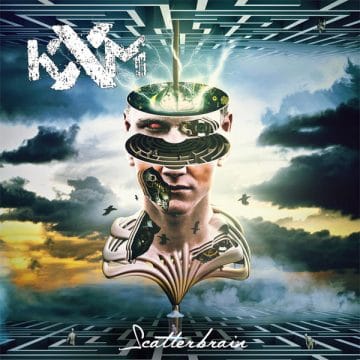 “Scatterbrain” features 13 brand new tracks and was recorded at the Steakhouse Studio in North Hollywood California where the band once again tapped Chris “The Wizard” Collier (Flotsam & Jetsam/Prong/Last In Line) to engineer the new effort.

From the infectious riff of the album opener “Scatterbrain” to the outro of “Angel,” KXM have created something truly special and musically diverse. Songs like “Breakout,” “Calypso,” and “True Deceivers” are sonically different from each other taking the listener on a musical journey. Scatterbrain is thematically a darker record than the debut. The album builds upon the developed KXM rock sound but this time includes some different dynamics drawing inspiration from prog, ska, punk and metal. Through it all, it remains undeniably KXM.

Speaking about the recording process for KXM’s new record, vocalist dUg Pinnick comments, “We wrote all the songs right on the spot and immediately recorded them, everyone doing his part and no one telling the other one what or how to play, just like the previous album!”. Drummer Ray Luzier adds “We wanted to use the same formula as the 1st KXM record…book studio time, come in fresh every day with a new idea, run with it and not over think anything” . 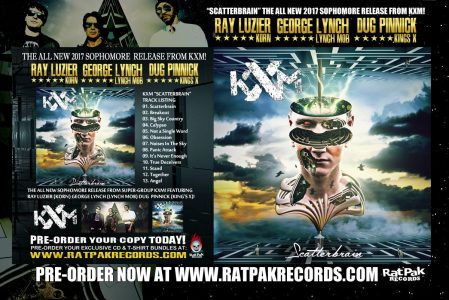 Basically it was “Record-topia”, we showed up in the studio, camped out with a bunch of gear and let the tape roll!” states guitarist George Lynch. “Just like the first album, no pre-production, no rehearsal, no pre-written songs, every song was written as a product of an in-studio jam session!”

On the topic of the musical direction and overall vibe of the new album Ray recently told Modern Drummer Magazine; “It’s a darker record than the first one, it’s really heavy and it’s very soulful with dUg‘s voice leading the way”. Ray further describes the direction of the new album, “There is some straight ahead rock, bits of prog, ska and tons of dynamics, there is a lot involved but it still sounds like KXM!” Official release date for KXM “Scatterbrain” is March 17, 2017.

Sleaze Roxx stated the following in its review of KXM‘s debut self-titled album:”The trio call themselves KXM — short for Korn, King’s X and Lynch Mob — and while not the most creative name, or even the best album title, it’ll have to do. Sound wise KXM isn’t that far removed from something you’d hear on a King’s X album, meaning great bass lines with soulful and dynamic vocals. The only difference here is that you have ‘Mr. Scary’ laying down his trademark guitar licks to this massive sounding music. And we all know Luzier has chops, however on this album he hangs back and plays in this impenetrable pocket alongside the grooves laid down by Pinnick. KXM features a collection of cohesive and brilliantly sequenced songs that make for a fabulous listening experience.”