South African sleaze rockers L.A. Cobra have released a teaser for the title track of their upcoming third studio album Shotgun Slinger, which is expected to be released in July 2017.

L.A. Cobra have launched a crowd funding campaign in advance of the release of their third studio album Shotgun Slinger. The band posted the following on its Facebook page back on April 18, 2017:

‘Breaking News:
L.A. Cobra can finally reveal that our crowdfunding campaign is live.
We ask all our fans to support us in achieving our goal.
You can now pre-order the new Shotgun Slinger album exclusively through our fund raising campaign.
We are also releasing a range of other merchandise including t-shirts, caps, and tattoo products.
What to look forward to:
– On Friday 21 April we will release a teaser for the first single off the new album. 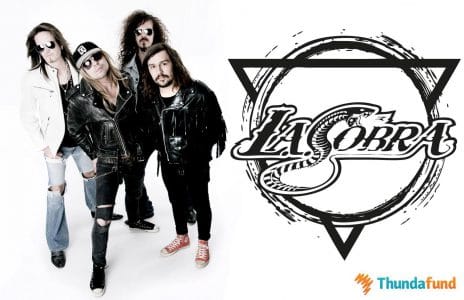 – Another teaser track will be released in the first week of May
– The music video for Shotgun Slinger will go live Friday 19 May.
– We will be giving away some merchandise throughout the campaign so keep checking our page.
Please share this campaign with all of your friends and help us launch our third studio album – Shotgun Slinger.

Shotgun Slinger is produced, mixed, and mastered by our friend and Swedish rockstar, Martin Sweet from CRASHDÏET, Sweet Creature, and Sister
* This campaign will only run for 60 days.
** All products shipped locally and internationally with tracking number.”

Teaser track of the first single from the Shotgun Slinger album. Get your L.A. Cobra merchandise from https://www.thundafund.com/project/lacobra and support …