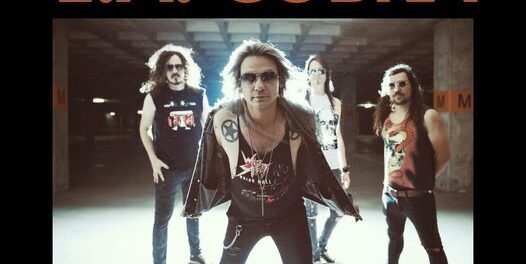 South African sleaze rockers L.A. Cobra consisting of frontman Don Cobra, guitarist Slade, drummer Callie the Animal and bassist Ewil Honey have announced that they have signed with Golden Robot Records for the release of their next studio album. 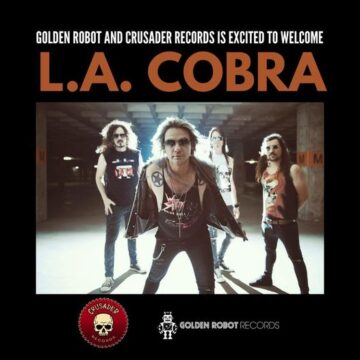 The band will release their 4th studio album under Crusader Records (part of the Golden Robot Global Entertainment Group).

“I am super excited for what the future holds”, says L.A. Cobra frontman, Don Cobra.

L.A. Cobra released all of its previous material independently and the band is now ready to broaden its horizons with the release of a new album later this year.

“Our 2017 album, Shotgun Slinger, really opened a lot of doors for the band and with our new release we want to build on its success. Signing with Golden Robot Records is an exciting opportunity to broaden our reach”, says Cobra guitarist, Slade Sleaze.

“Fifteen years of busting our balls paid off and I couldn’t be more grateful to be part of the Golden Robot Records / Crusader Records family” added Don.

L.A. Cobra has been in the studio for most of 2020 and the new album (title to be announced soon) is set for worldwide release under the Crusader Records banner. The band is again joining forces with Martin Sweet (Crashdïet) for the production, mixing, and mastering on this new album.

“Due to the Covid pandemic we had to postpone our 2020 European tour. Perhaps everything happens for a reason and now we can reschedule the tour properly. Signing with Golden Robot Records is definitely a surreal experience. We have been working towards this for the last 15 years so you’d think I’d have something clever to say about it. I don’t. Except that I am really excited”, says L.A. Cobra drummer, Callie ‘The Animal’.

“It’s been a life-long dream for me to sign with such an epic record label. It is a privilege to be part of the Golden Robot Records family”, added Ewil Honey, Cobra bassist.

L.A. Cobra joins the Golden Robot Records family amongst a long list of the best that the music industry has to offer, including L.A. Guns (feat. Riley and Nickels), Hardcore Superstar, Wildstreet, Toxic Rose, Gilby Clarke, Phil X, and many more.

For media enquiries or interviews