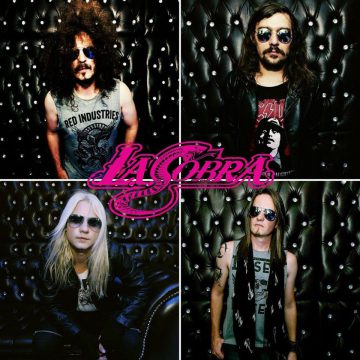 The YouTube caption for L.A. Cobra‘s Rockdown Sessions via The Weekly Wire indicates:

“L.A. Cobra is an international band, best known for their sleazy style, which harkens back to the golden age of hair rock! Expect BIG vocals, BIG hair and a stadium show, streamed directly to your living room.

Please be sure to support L.A. Cobra by either using the BUSQR code provided or by using their PayPal

“This is the surprise album of the year. I really was not expecting L.A. Cobra‘s third studio album Shotgun Slinger to be even half as good as it turned out to be. L.A. Cobra also get the distinction of being the first band from the African continent to figure on a Sleaze Roxx year end top albums list. Given that L.A. Cobra had previously released two albums, one might wonder what is the difference this time around with Shotgun Slinger? Although it’s difficult as an outsider to gage the impact that Crashdïet guitarist Martin Sweet made on Shotgun Slinger, it is worth noting that Sweet is the only artist to ever figure twice at the top spot of Sleaze Roxx’s Top Ten Albums of the Year (with Crashdïet‘s Generation Wild in 2010 and Sweet Creature‘s debut album The Devil Knows My Name in 2016). In addition, Sweet is the only artist to figure three times with three different bands on Sleaze Roxx‘s year end top albums list although this time it’s for the guitarist’s production, mixing and mastering duties. Whatever the case, L.A. Cobra have hit the nail right on the head with Shotgun Slinger delivering catchy rockers with just the right level of sleaze.”