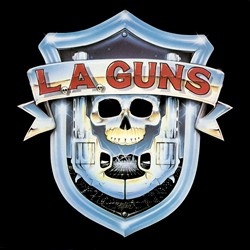 If you’re looking for the Godfather of the early eighties LA rock scene, then guitarist Tracii Guns is your man. A hustler, a human dynamo and a hugely talented band leader, Guns broad-shouldered his way onto the Hollywood strip with a succession of fledgling acts, including Hollywood Rose a band that evolved into the legendary Guns N’ Roses. Forming L.A. Guns, the band was solidified with the addition of British front man Phil Lewis, fresh from the well respected glam rock band Girl and former W.A.S.P. drummer Steve Riley. Recorded in Los Angeles with producer Jim Faraci (Ratt, Poison, Femme Fatale), the results were hugely encouraging, the band whipping up a frenzy of low-slung sleaze in the finest style, going on to sell over a half a million units.

The platinum selling album ‘Cocked & Loaded’ was recorded in Los Angeles with seasoned producers Tom Werman (Motley Crue, Twisted Sister, Cheap Trick) alongside Duane Barron and John Purdell (Poison, Ozzy Osbourne, Heart) and featured guest appearances from Ted Nugent, Derek St. Holmes, Robin Zander and Rick Nielson. It confirmed that L.A. Guns were more than just a flash in the pan by storming the US charts and producing two bonafide hit singles with “Never Enough” and “The Ballad Of Jayne”. Stylistically their no-nonsense style of razor sharp riffs and tough-guy bravado makes it one of the most comprehensive and exciting records to have emerged from the glam/sleaze movement.