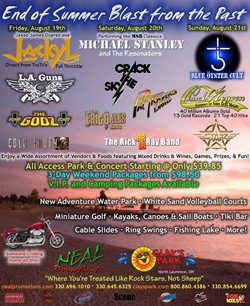 L.A. Guns And Jackyl Confirmed For Blast From The Past Festival

L.A. Guns, Jackyl, Pat Travers, Blue Oyster Cult, Starz and The Godz are among the acts that are scheduled to perform at the Blast From The Past festival taking place August 19th to 20th in North Lawrence, Ohio.

Promoter Steve Neal, who books bands into the Cleveland Agora, had an idea sometime around March of 2011 to put on a huge concert event, something that would be too big for the Cleveland Agora. After some research, he picked the Clay’s Park Amphitheater, chosen not just for it’s size, but the ability of the audience to have a great time without interference.

On Saturday, August 20th Michael Stanley, the Pat Travers Band, Crack The Sky, the Eric Gales Band and the Rick Ray Band will rock audiences. There will also be a hot air balloon fest at Clay’s Park on this day, plus a Harley Davidson (2012 883 Sportster) will be given away that evening.

You can get a hold of Steve Neal of Neal Promotions at 330-696-1010 for more information and tickets (which start at $39.85) or go to www.nealpromotions.com/clays.htm. There is also more info available at www.clayspark.com.