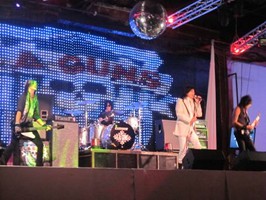 While finishing touches are being put on their summer-release studio album ‘Hollywood Forever’, L.A. Guns spent a few days in Los Angeles shooting three videos to support the record, and are releasing “You Better Not Love Me” online next week.

With videographer Jack Foster behind the lens, the band shot indoor scenes at the legendary Circus Disco in Hollywood. With an LED logo in the background, the band meshed theatrics with its expected rock energy on the big stage. Later, additional scenes were shot in L.A.’s colorful Little Mexico and the landmark Hollywood Forever cemetery. Videos for “Requiem (Hollywood Forever),” and “Aranga Nigre” were also shot.

Said Stacey Blades, “It was a blast hammin’ it up in a big venue and stage for the cameras. We are so excited about the new album coming out and videos to boot. 2012 is the year of L.A. Guns!”

Also announced this week is the final track list for ‘Hollywood Forever’. The album, which is the fourth L.A. Guns record produced by Andy Johns (Led Zeppelin, Rolling Stones, Van Halen), will drop on June 5th.

Additionally, L.A. Guns is taping an exclusive interview with That Metal Show on March 17. They’ll discuss moving above and beyond past conflicts and the exciting events of 2012, including the album and upcoming tour. The episode will air May 19.