L.A. Guns‘ bassist Kenny Kweens is apparently more than just a pretty faced talented bassist as his account on his Facebook page of a recent night out to the Rainbow Bar & Grill attests to: 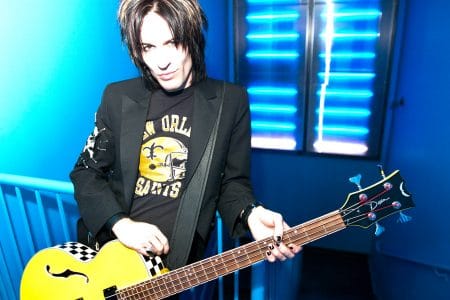 “I would like to thank everyone for the concerning phone calls, texts, emails etc. I am fine. Last night after landing back in L.A. from a week of Texas Tour Dates, I thought it would be a good idea to go to the Rainbow Bar & Grill Backyard Bash to celebrate the Labor Day weekend with some good ole Rock-n-Roll. So just a few short hours after our plane lands at the airport, I am now being greeted back home from friends and fans, feeling great. I made my way to the outside bar with some friends having my first drink when this bald guy with a tattoo under his eye comes towards me smiling, so I thought he might a fan of the band? Then he pushes me and takes a swing trying to punch me. I did my best matrix move and leaned back, so he missed, but he did punch my hand knocking my drink to the floor.

Now, that’s a sin and a shame all on it’s own. A perfectly good Lemmy (Jack & Coke) wasted right at Lemmy‘s Corner, his favorite spot to sit? What?? Oh Lord have mercy on this poor ugly bald headed man’s soul, because I didn’t… Does this man not know the sacred ground of which he stands on or the holy water that he just wasted? Now listen, I may be more pretty than this guy’s girl friend, but that also doesn’t mean I won’t mop the floor with his silly ass. So I reach back far, like really really far, like all the way back to Mississippi and then I came back unleashing a perfectly thrown right cross to his already ugly face. Oh, did I mention I had my spiked gloves on?

Why would someone pick a fight with someone wearing spiked gloves? Who does that? Big bald ugly guy, not so smart. Now he has a new tattoo on the other side of his face. I then grabbed his head putting him into a front face lock and in the name of Rock-n-Roll (& Jake “The Snake” Roberts), I dropped a DDT on him smashing his head into the floor right in front of the new Lemmy Statue. I remember thinking on my way down, this one is for you Mr. Kilmister! I thought I saw the Lemmy statue give me a wink of approval or maybe it was a tear because of the wasted Jack Daniel’s… Anyway, the bald guy was thrown out. I went to back to the bar to get a double from my friend Rachael the bartender and enjoyed the rest of my night with my friends. So to all that is sacred in Rock-n-Roll, I salute you! Oh, have a happy and safe Labor Day.”