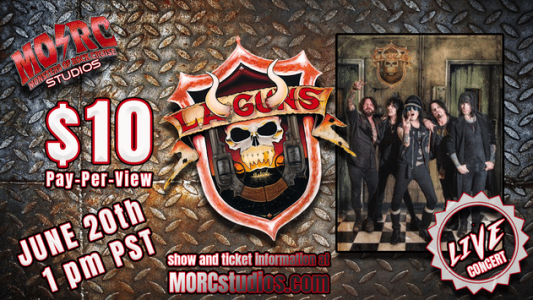 + Entrance to the show

+ Zoom call by the band directly after the show**!

**must be available directly following the show”

A few days ago, Lewis played a well received solo acoustic live stream set at the MORC Studios. Sleaze Roxx stated the following in its review of the show: “Two things struck me while listening to Lewis perform his acoustic set. First of all, Lewis really has a great voice that can really carry a song. There is no doubt that the man has some great vocal pipes and that he has done a good job preserving them over the years. Second of all, it was really fun to hear these rarely played L.A. Guns tracks and it reminded me what a vast catalog of great songs that L.A. Guns truly possess. I was also impressed that Lewis was donating any “tips” that he received for his performance to Kitten Rescue. Three months without any gigs of any kind can’t be easy financially for any musician but here was Lewis putting a charity first.”