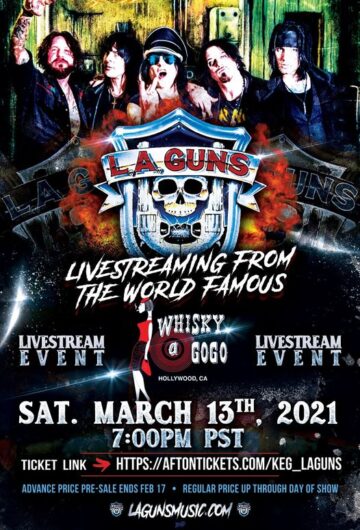 The L.A. Guns version spearheaded by guitarist Tracii Guns and lead vocalist Phil Lewis along with bassist Johnny Martin, guitarist Ace Von Johnson and drummer Scot Coogan will be playing another live stream concert on March 13, 2021 at 7:00 pm PST and this time from the legendary Whisky A Go-Go in West Hollywood, California, USA. Tickets can be purchased via Afton Tickets‘ website.

Sleaze Roxx stated the following in its review of L.A. Guns’ (feat. Lewis and Guns) live stream performance from the Monsters of Rock Cruise Studios back in mid-June 2020

“The thing about all of the great bands of our genre at this stage of the game is they are only as good as their vocalist. That is not to dismiss Tracii or the rest of the band. It is only to say that if the singer can perform, the band still feels like the band. And, Phil still has the voice and the tone to make the show. But, I will say that the show fell a little flat….

Well, I found out what an L.A. Guns show feels like without a crazy group of people ranging from guys in the crowd who look older than they are behaving like fools having too many beers and women looking younger than they might be rocking clothes cell phone cameras were created to create a lasting memory of. The music was right, and the energy was almost there from the band. But, it just was missing that live element of my peers and the danger of what a live crowd could deliver. The excitement of having people around me of all ages, from younger than me to far older, all loving what they’re seeing and behaving the way they do when they truly let go. I might have let go some in my computer chair singing along and drumming on the arm rest. But, that just isn’t the same. It really isn’t. That isn’t the band or the production company’s fault. It is the fault of the state of the world. And, I for one have had about enough of this shit.”