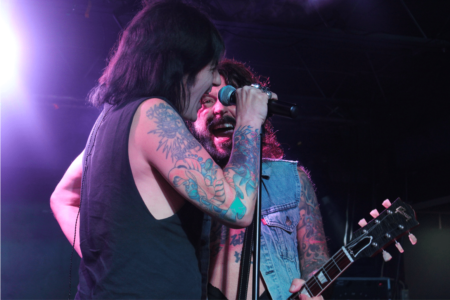 The L.A. Guns version featuring lead vocalist Phil Lewis and guitarist Tracii Guns along with guitarist Ace Von Johnson, bassist Johnny Martin and drummer Scot Coogan has two albums on the way this year. The first one is a live album consisting of the group’s live stream performance of the album Cocked & Loaded in its entirety back on November 28, 2020.  The second is a new studio album with the rather fitting title of Checkered Past set for release sometime in November va Frontiers Music Srl.

Guns provided that information while recently appearing on Hatebreed frontman Jamey Jasta‘s podcast The Jasta Show and as reported by Blabbermouth.

Since “reuniting” in 2016, Lewis and Guns have released a couple of well received studio albums under the L.A. Guns name consisting of The Missing Peace (2017) and The Devil You Know (2019) along with the live album Made In Milan (2018) and the Christmas covers EP Another Xmas In Hell (2019).

Sleaze Roxx stated the following in its review of the group’s live stream performance of Cocked & Loaded back in November 2020: “To Tracii, Phil, Johnny, Ace, and Scot: you guys rocked the house! Thank you for a killer concert. I’m sure there are a lot of requests for refunds coming out of this. That’s not your fault. You need to make sure that Veep absorbs those costs for making you sound like you were rehearsing without all of your equipment instead of putting on a great live show.”

Interview with Tracii Guns on The Jasta Show podcast: