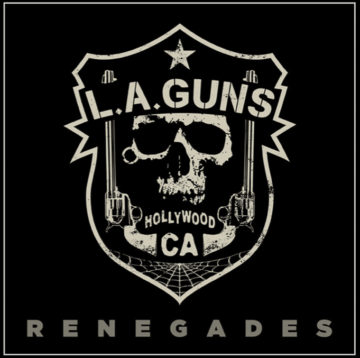 fifth single from their new album Renegades, which was released via Golden Robot Records on November 13, 2020. Renegades finished at #8 on the Sleaze Roxx’s Top Ten Albums of 2020.

“Legendary Hollywood rockers L.A. Guns dropped their critically acclaimed new album Renegades on the appropriate date of Friday 13th November. Renegades has been described as one of their greatest albums of their distinguished career.

The album produced 4 smash singles “Crawl”, “Well Oiled Machine”, “Renegades” and “All That You Are” and the band received heavy representation on the esteemed and highly influential Spotify Hard Rock Playlist.

Now as an intro to 2021 and to fire the machine back up, L.A. Guns have released a new single from the album, the now appropriately named ballad “You Can’t Walk Away” which has now developed a deep meaning in more ways than one.

“This is a song I wrote with a friend, Tommy Holland, over 35 years ago in Chicago. I brought it to pre-production for the Renegades album and the band finished it with a new chorus and some other minor changes. We are very proud of it and hope it follows in the footsteps of Ballad of Jayne.” – Steve Riley