History will be made on May 4, 2019 when L.A. Guns play for the first time without singer Phil Lewis or guitarist Tracii Guns in the line-up as the L.A. Guns version featuring two classic line-up members Steve Riley (drums) and Kelly Nickels (bass) will be playing live for the first time at the M3 Rock Festival in Columbia, Maryland, USA that day.

This version of L.A. Guns sees the return of bassist Kelly Nickels in a L.A. Guns line-up in almost two decades. The group has provided some further details about its upcoming M3 appearance via its Facebook page:

− This is the only planned show!

− Yes, there will be two versions of L.A. Guns that day.

− Only the guys in the photo above will be playing M3. (Steve Riley, Kelly Nickels, Scott Griffin, Kurt Frohlich)

− Yes there will be a limited supply of merchandise at the show!

− Yes we will be meeting and signing after the show. 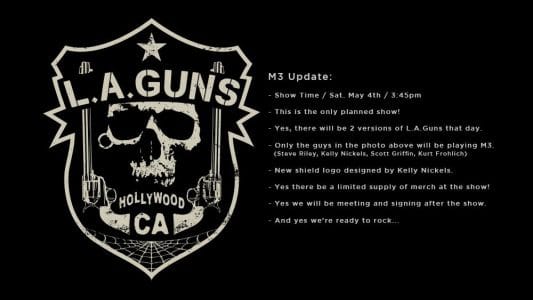