The M3 Rock Festival gig on May 5, 2019 was apparently not an one off performance for the L.A. Guns version consisting of  drummer Steve Riley, bassist Kelly Nickels, lead guitarist Scott Griffin and lead vocalist / rhythm guitarist Kurt Frohlich as the 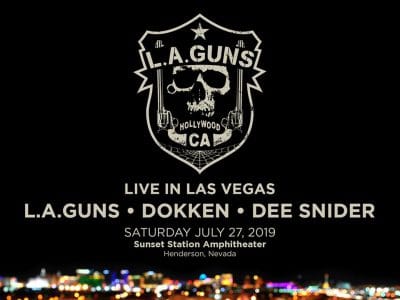 band has lined up an additional festival type show at the Sunset Rockfest, which will take place at the Sunset Station Amphitheater in Henderson, Nevada, USA on July 27, 2019.

We are so excited to announce we will be playing with Dokken & Dee Snider at the Sunset Rockfest July 27th. 2019 at the Sunset Station Amphitheater Las Vegas. Tickets available at www.stationcasinolive.com and www.ticketmaster.com See you there…!!!”

Sleaze Roxx stated the following in one of its two reviews of L.A. Guns‘ (feat. Riley and Nickels) performance at the M3 Rock Festival on May 5, 2019:

“So here it is – the $50 million question — could Kelly Nickels and Steve Riley pull it off? With this being the second version of L.A. Guns currently out playing live, many were skeptical. I myself could not wait. I knew that these two members of the band’s classic line-up would be ready. These are professional musicians remember. “C’mon Tyson? Really? We’ve seen the live footage. Singer Kurt Frohlich isn’t original vocalist Phil Lewis!” “Okay, fair enough, but this isn’t L.A. Guns with Phil Lewis. This is L.A. Guns with Kurt Frohlich on vocals! He’s amazing in his own right and makes it very believable!” “But Tyson, the other version is better!” “Are they though?” From what I saw on that stage, there was a certain energy that really brought out the best in this version of L.A. Guns. That energy and attitude was what made me love L.A. Guns back in the day. My personal feeling is that bassist Kelly Nickels is one of the original members of the band that brings a lot that energy and attitude to the stage.

As for guitarist Scott Griffin — who would have thought the former bass player of L.A Guns could shred on guitar like he does. I spoke with Griffin later on at the hotel and complimented him on a job well done. He mentioned that he played bass to get the gigs, but has always played guitar.”