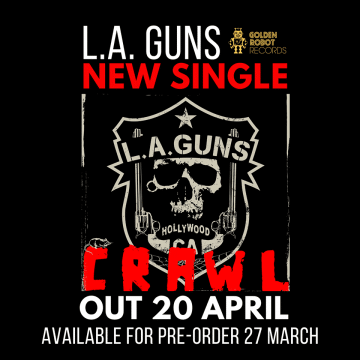 Big news on the L.A. Guns front as the band version spearheaded by drummer Steve Riley and bassist Kelly Nickels along with guitarist Scott Griffin and lead vocalists Kurt Frohlich will be releasing a new single titled “Crawl” on April 20, 2020. It is anticipated that this new L.A. Guns line-up will be releasing its “debut” album via Golden Robot Records in the spring of 2020.

The following message was posted on the group’s Facebook page less than an hour ago:

“Are you ready…? We are so thrilled to announce that our first single “Crawl” will commence pre-save/order on Friday, March 27 and drops on April 20th 2020…🏴‍☠️🔥😊🌎💀@goldenrobotrecords”

Back in December 2019, the band posted the following message on its Facebook page about the completion of its album: