L.A. Guns lead vocalist Phil Lewis and guitarist Tracii Guns have not been shy about voicing their discontentment with drummer Steve Riley playing the upcoming M3 Rock Festival in Columbia, Maryland, USA on May 4, 2019 under the L.A. Guns name. 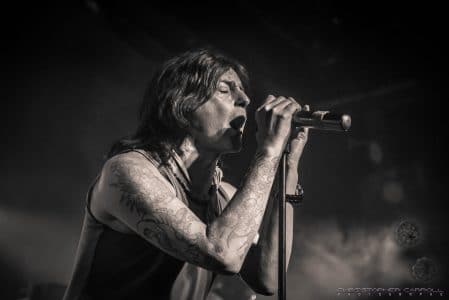 Lewis has also not been shy of posting comments via Facebook on various threads including in the M3 Rockers‘ Facebook group earlier today.

After someone asked the question “Anybody know who the opening act is in Sellersville for LA Guns tonight?”, Lewis posted a number of comments including the following:

“This ain’t the place to be asking this question
M3 fucked us over
Nothing against our loyal fans but we want nothing to do with this forum if youall perfectly ok with imposters cashing in on all our hard work over the last 3 years.”

“no offense to any of you. I just feel fucked over by the event
We’ve done it several times and it was always a blast and that’s why it feels such a kick in the teeth
That make sense??”

“Not at all Glen we made it very clear when we got the initial offer and respectfully declined due to logistical issues but they went ahead and advertised anyway
Messed up shit.”

“Yeah I get that just giving my perspective. I don’t want to dump on you or the event. Just bitching about the blatant theft of our name Deceptively”

In an interview with Sleaze Roxx last month, Lewis did acknowledge that Riley had the legal right to use the name L.A. Guns as he stated the following about Riley and Guns obtaining the L.A. Guns name on a 50-50 basis over two decades ago: “Yeah! All that stuff went down when I wasn’t in the band. I guess it had never been registered — the trademark or whatever — the rubber stamp. And I wasn’t in the band. I wasn’t even in music. I was working at Fox and I really couldn’t care less what they did. I guess it was as simple as writing out an application, standing in line at the courthouse downtown and having it stamped, and they made no stipulations. They said, “OK. We got the name 50-50.” And that was it. That was the legacy that ensued after that. That’s the piece of paper. It’s ridiculous and Tracii should have never have done it. He knows that but he did. Just have to deal with that.”

Lewis also gave his thoughts on Riley‘s version of L.A. Guns playing the M3 Rock Festival this year as he stated: “I’m laughing my head off. I’m absolutely — this is fucking comic gold that Riley is even stupid enough to accept this offer and the offer came about only because the organizers at M3 are mad at us for not doing it. We have this on full authority. You know, they dug up some people. They told him put a band together. They’ll give him a slot. And very stupidly without thinking, he agreed to do it without having any band personnel.” 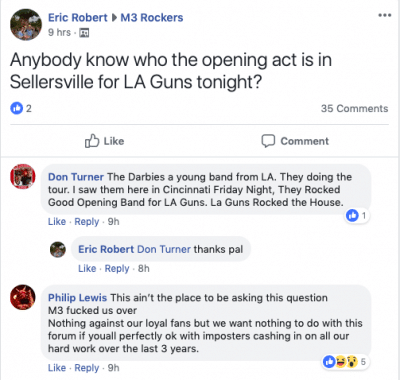