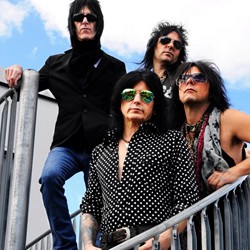 Guitarist Stacey Blades has decided to leave L.A. Guns after a lengthy run due to “extenuating circumstances and musical differences.”

“This isn’t an easy announcement but as of this month I will no longer be playing guitar for L.A. Guns,” states the guitarist. “I dearly wish Phil, Scotty and Steve much continued success. It’s been a crazy ten year ride filled with some amazing tours, albums and memories to last a lifetime! Due to extenuating circumstances and musical differences I have decided not to continue with the band. L.A. Guns was a dream come true but life is full of new beginnings and journeys. I will be taking some time off and have some different things lined up that I will share with you in the near future. I would like to first and foremost thank the fans for allowing me into your hearts! You guys Rule!! Hope to see you all soon!”

Stacey Blades became L.A. Guns’ official guitarist during a tumultuous peroid for the band, when original member Tracii Guns left the band to form Brides Of Destruction with Nikki Sixx and later touring under the L.A. Guns moniker with several different vocalists. Blades made his recording debut with the band on 2004’s ‘Rips The Covers Off’ and also appeared on the studio albums ‘Tales From The Strip’ and the band’s recent release ‘Hollywood Forever’. Prior to joining L.A. Guns Blades had been around the L.A. music scene for many years recording and playing lead guitar in both Roxx Gang, Supercool and S.M.A.C.K..

L.A. Guns bassist Scotty Griffin is sad to see his bandmate leaving. “I’m gonna miss ya bro,” he said. “First of all, you were the one that brought me into this beautifully dysfunctional family, affectionately known as L.A. Guns, and for that I will always be grateful. It’s been a blast to say the least. And that’s just the parts I can remember! Bro, for the past 5 years I’ve enjoyed, and felt privileged, to be able to look over my left shoulder on many a stage, around and literally ACROSS the entire world, and watch you pour out your soul to total strangers in darkened rooms on a piece of wood wound by six strings night after night. And to have gotten drunk with, and had a million laughs with, and went through all the bullshit with, and SURVIVED all the bullshit with, in all those miles too, I couldn’t have asked for anyone better to have been my partner in crime.”

“But just as every Hawaii Five-O must have a ‘Book ’em Danno. Murder One!’, so must the final credits of L.A. Guns/The Blades Years now roll I guess,” concludes Griffin. “I sincerely wish you all the luck in the world on whatever you decide to do. And I totally understand, bro. As my grandpa would say ‘A man’s gotta do what a man’s gotta do.’ I love you, brother! You will be missed, but hopefully not lost. You better stay in touch, fucker!”

L.A. Guns have yet to announce Blades replacement, however MetalSludge.tv is reporting that former Sea Hags and Stephen Pearcy/Arcade guitarist Frankie Wilsey will be the band’s newest member.